Freelance director/dramaturg and, since January 1998, an Associate Professor in the Theatre Area of School for the Contemporary Arts, at Simon Fraser University in Vancouver, British Columbia, where he teaches directing, dramaturgy, playmaking, and his version of theatre history.

At SFU, he has directed Howard Barkers Seven Lears and The Possibilities, Charles L. Mees Big Love, Michael Hollingsworths History of the Village of the Small Huts: Laurier, and Gertrude Steins Doctor Faustus Lights the Lights.

Since arriving in Vancouver, Kugler has been the dramaturg on the premieres of Lucia Frangiones Espresso (Pacific Theatre), Linz Kenyons Cowboy King and The I.O.U Land (Caravan Theatre), and four theatre/dance works: Spektator, Cyclops, Reptile-Diva, and [storm] (Battery Opera). He was also the director/dramaturg of the premieres of Mansel Robinsons Picking Up Chekhov (Alberta Theatre Projects), and Kathleen Olivers Carols Christmas (Arts Club).

Kugler served eight seasons (1985-93) as Production Dramaturg with Torontos Necessary Angel Theatre on productions of Jason Shermans Two in the Back, Three in the Head, Colleen Wagners The Monument, David Youngs Glenn, John Krizancs The Half of It, Michael Springates Dog and Crow, and two productions of Howard Barker texts: The Europeans and The Castle. During his tenure at Necessary Angel, Kugler also adapted Marc Diamonds Property and, in collaboration with Artistic Director Richard Rose, he co-authored Newhouse, as well as the adaptations of Michael Ondaatjes Coming Through Slaughter, and Timothy Findleys Not Wanted on the Voyage 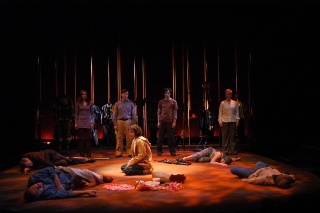 A long-time member of Literary Managers and Dramaturgs of the Americas, Kugler and served a two-year term as LMDAs first Canadian President (2000-2002).