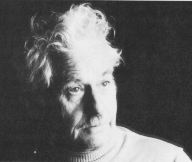 Playwright and fiction writer born in Weyburn, Saskatchewan in 1914, died February 25, 1998, W.O. Mitchel was one of Canada's best-known storytellers.

His collection of stories, Jake and the Kid was first published in Maclean's over two years, beginning in 1942. It was adapted as a CBC radio series (1950-56), and later for the stage (Rosebud Theatre 2011, dir. Morris Ertman).

W.O. Mitchell is probably best known for his first novel Who Has Seen the Wind? (1947), adapted for the stage in 2002 by Lee MacDougall and presented at Citadel Theatre. His other novels are The Kite (1962), The Vanishing Point (1973), How I Spent My Summer Holidays (1981), and Since Daisy Creek. He also wrote extensively for radio and television.

He was a Member of the Order of Canada and won the Chalmers Award for Back to Beulah (premiered at Theatre Calgary in 1976, directed by Guy Sprung and subsequently played in theatres across Canada). His other plays include: The Day Jake Made Her Rain (Alberta Theatre Projects 1976,

Mitchell's writing is earthy, sometimes salty, usually hilarious (with a huge dose of ironic, homespun humour) and without pretension. Mitchell was also capable of giving magnificent public readings of his work.