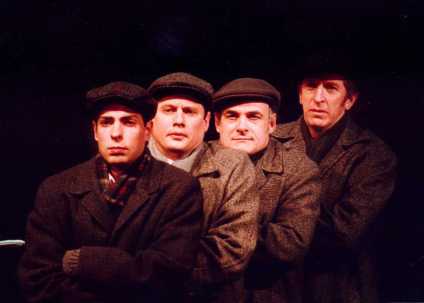 Playwright born in Oakville, Ontario, in 1946.

David Young was the middle child of three; his father was an advertising agent. He developed a leg infection as a child and his subsequent 18-month hospitalization still affects his work thematically. He studied at the University of Western Ontario.

He was a tour guide in Europe and then was an editor for Coach House Press from 1981 until the company folded in 1996.

Among his plays are Fire (written with Paul Ledoux and nominated for a Dora Mavor Moore Award and winner of a Chalmers Award), which played across the country to huge acclaim. With Ledoux he also wrote Love Is Strange (premiered at Magnus Theatre, 1984, directed by Brian Richmond) based on the true story of a Saskatchewan man who stalked singer Anne Murray.

His study of the pianist Glenn Gould, Glenn, (Necessay Angel at Harbourfront, Toronto, 1992, dir. Richard Rose) is his best-known work. Four actors play Gould at four stages of his career. Glenn was revived at Great Canadian Theatre Company and at Stratford Festival in 1999. It was again revived by Soulpepper Theatre Company in September 2014 (dir. Diana Leblanc) with Jeff Lillico, Mike Ross, Steven Sutcliffe, and Brent Carver as Gould in his last years. It has been performed in Japan, Germany, and the Netherlands.

Inexpressible Island (premiered by Necessary Angel, 1997, directed by Richard Rose, revived at Canadian Stage, 1998) is about six researchers with Scott's Antarctic expedition, who survived a whole winter in a snow cave, eating seal meat, while Scott's company starved elsewhere. It was a finalist for the Governor Generals Award and explores psychological conflicts, and what Young has referred to as "the ecstatic experience." His play, Clout premiered at National Arts Centre, January, 2001, directed by Rose.

No Great Mischief, adapted from the epic novel by Alistair MacLeod about a tragic Cape Breton family, premiered in 2004 at Tarragon Theatre, remounted in 2012 (dir. Richard Rose), with a strong cast including RH Thomson and David Fox as the brothers, and Nicola Lipman as the grandmother.

David Young is the father of one son, Ben, by his former wife Sarah Sheard.