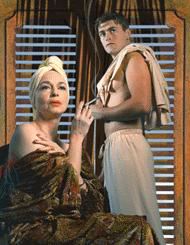 Ontario-based actor, born in Claresholm Alberta in 1953. He has a BFA degree in Drama from the University of Calgary.

Among notable productions in which he has performed is the premiere of Judith Thompson's I am Yours (Tarragon Theatre, 1987 for which he received a Dora Mavor Moore Award), a 1987 revival of Michel Tremblay's Hosanna (directed by Richard Monette, who had created the title role in English).

For the Stratford Festival he performed major roles in Sweet Bird of Youth (opposite Martha Henry), King Lear, Death of a Salesman, Romeo and Juliet, Cat on a Hot Tin Roof and Night of the Iguana, among others. In 1999, he appeared in the company's production of Pride and Prejudice as Mr. Darcy. In 2004, he performed in his first musical as Nathan Detroit in the Stratford Festival's Guys and Dolls.

In 2005 Geordie Johnson directed his first play, the one-woman show The Blonde, The Brunette and the Vengeful Redhead starring Lucy Peacock at the Grand Theatre in London. Johnson discovered the play while visiting Australia and brought it back with Lucy Peacock specifically in mind. The production enjoyed a three-month run in Stratford in the summer of 2006.

Early in 2006, he appeared in John Murrell's Democracy at the Great Canadian Theatre Company in Ottawa.

He has also performed at the National Arts Centre, Citadel Theatre, Canadian Stage and at the Shaw Festival.

Film and television appearances include The English Patient, The City, for which he won a Gemini Award, and Murdoch Mysteries.

Geordie Johnson's performances are marked by an elegant presence and a mellifluous voice. From leading man roles at the beginning of his career, he matured into an actor with a very wide range.