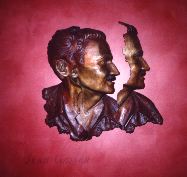 Actor/director born in Montreal, Quebec in 1921, died at Stratford, Ontario in 1988.

Comfortable working in the nation's two official languages, Jean Gascon was one of the first of several stars to emerge from the Compagnons de Saint-Laurent and to go on to achievements that have been rarely surpassed in the long history of theatre in Canada.

He began to attract attention with friend and long-time collaborator, Jean-Louis Roux, while performing as an amateur in the Collège Sainte-Marie. Gascon studied medicine even while he pursued a career with the Compagnons. He was advised to go to study theatre in France, which he did in 1946 with Roux. The peculiar accent he absorbed there would colour his magnificent basso voice and the roles he played for the rest of his career.

When he returned to Canada in 1951, a burgeoning national theatre awaited him. Gascon, Roux, Eloi de Grandmont and several others founded the Théâtre du Nouveau Monde/TNM. Gascon became the company's first artistic director, frequent director and one of its leading actors. (A series of in-house awards given by the company to this day bears his and Roux's name.)

The Nouveau Monde also gave training but soon Gascon decided to extend the education offered there and helped form the National Theatre School of Canada which taught in French and English. Gascon was director of the school from 1960-63 as he continued to lead the Nouveau Monde in productions from the classical and modern repertories (Molière's L'Avare/The Miser, Shakespeare's Richard II, Brecht/Weill's Opéra de quat'sous/Threepenny Opera). The company also toured Europe, the United States and the rest of the country. Those who knew Gascon remember him as a first-class raconteur and his bawdy tales of the tours are legend.

Jean Gascon also acted with the Stratford Festival in 1956 while the Nouveau Monde performed three works in French at the Festival. He returned there to direct Othello and Comedy of Errors in 1959. In 1968 he became the company's artistic director until 1974. Stratford, under his tenure, grew and usually flourished, though his attempt to introduce contemporary European works into the season were less fruitful. However, Stratford toured very successfully including one stint in New York where Gascon's work as director on Feydeau's There's One in Every Marriage even melted the heart of critic John Simon who called the piece, "...joyously staged...a lambently innocent orgy of laughter..." Gascon took over the theatre wing of the National Arts Centre in 1977 before giving up the post due to illness in 1984. He continued, during the NAC years, to direct elsewhere including at the Théâtre Populaire du Québec and he served as consultant for the Citadel Theatre.

Gascon continued to teach, however, and also occasionally directed opera. He was in rehearsal for a return to Stratford to direct My Fair Lady when he suffered a heart attack and died.

Gascon received many of the nation's highest honours including the Order of Canada, the Prix du Québec, the Royal Bank Award and the Molson Prize.

He once said of the joys of working, "[As a director] I act a lot at rehearsals. I always want to play all the roles."

The Players, National Film Board, 1974, dir: Donald Britten, 1974, about the Stratford tour to Australia with The Imaginary Invalid.