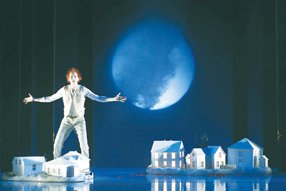 "Into the Woods" Stratford Festival
Jack 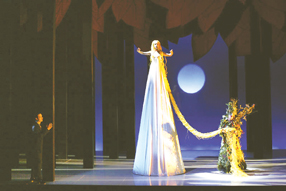 "Into the Woods" Stratford Festival
Rapunzel and Witch

"Into the Woods" Stratford Festival
Little Red and Wolf 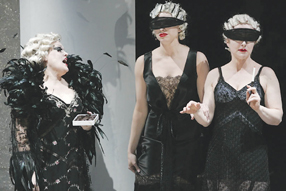 "Into the Woods" Stratford Festival
Step Mother and Step Sisters

Set and costume designer, born in Montreal and based in Toronto. Dany Lyne has an Interior Design Diploma from Dawson College (1981), a degree in Fine Arts and Theatre from the Ontario College of Art and Design (1991), a year residency in Opera Design at the Banff Centre for the Arts (1990-91), and an MFA in Set and Costume Design from the University of Victoria (1993).

Dany Lyne has received eleven Dora Mavor Moore Award nominations for Outstanding Set and Costume Design, with one Dora Award for the set design of Alisa Palmer's The Attic, The Pearls, and Three Fine Girls at Buddies in Bad Times Theatre.

In October 2006 she was awarded the Siminovitch Prize in Theatre, Canadas largest annual theatre award. In her acceptance speech, Lyne expressed her reasons for working in theatre: "The sheer multi-dimensionality of theatre filled me with incredible awe: not only is it three-dimensional visually, it is space-specific, unfolds in real time, includes spoken or sung word, explores the truths and lies of existence through narrative, and engages the soul of the musician and the expressiveness of the human body."

She has taught at the National Theatre School of Canada, and the Ontario College of Art and Design. Since 2006, she is a CranioSacral Therapist, Reiki Master, and Trauma Intuitive.