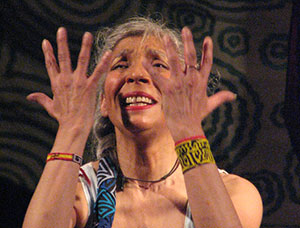 Activist actor and playwright of Guna and Rappahannock ancestry, daughter of Gloria Miguel, who is a founder of the American First Nations Theatre, Spiderwoman. Monique Mojica is based in Toronto, Ontario. Her acting credits include: Red River by Daniel David Moses and Jim Millan; Mango Chutney, The Rez Sisters by Tomson Highway; Jessica by Maria Campbell and Linda Griffiths; Sucker Falls by Drew Hayden Taylor; Governor of the Dew by Floyd Favel; The Adventures of a Black Girl in Search of God by Djanet Sears; and Home is My Road by Florence Gibson MacDonald. She also played Ariel in Skylight Theatre's The Tempest. In 2018, she played a daughter visiting her dying mother in Honour Beat by Tara Beagan (Theatre Calgary, dir. Michelle Thrush), which celebrates the resilience and strength of Indigenous women, despite their traumatic history. In September 2019, she appeared in The Unnatural and Accidental Women by Marie Clements at the National Arts Centre, the first production by the newly established Indigenous Theatre section of the NAC.

Monique Mojica's play, Princess Pocahontas and the Blue Spots was produced by Nightwood Theatre and Theatre Passe Muraille in 1990, directed by Muriel Miguel, with dramaturgy by Djanet Sears and Kate Lushington, and featuring Monique Mojica with Alejandra Nunez as musician /composer. The play weaves together past and present, North and South America, history, documentary and myth, satirizing colonization and celebrating Native women as creators and healers. It was published by Women's Press in 1991 and included in the anthology of First Nations drama in English, Staging Coyote's Dream (2003), edited by Monique Mojica and Ric Knowles. It has been produced on CBC Radio. Her radio play, Birdwoman and The Suffragettes: a story of Sacajawea, has also been produced by the CBC.

Together with Jani Lauzon and Michelle St. John, she formed the Turtle Gals Performance Ensemble, which collectively devised The Scrubbing Project (Native Earth Performing Arts co-production with Nightwood Theatre 2002). Through oratory, song and dance, and integrating vaudeville slapstick routines, Medicine Shows, and Broadway musicals, it attempts to reconnect with a pre-contact past and reclaim the history and memories of three culturally displaced Native women.

In May, 2011, her play Chocolate Woman Dreams the Milky Way premiered at the Helen Gardiner Phelan Playhouse, University of Toronto (dir. Jose A. Colman). It tells the story of a woman who survived by returning to her ancestral land and connecting to the powerful forces within Kuna cosmology, such as Chocolate Woman. It was inspired by Kuna mola (textile) art and pictographic writing for its narrative form and style. It always employs stories from the cosmologies of the Guna people of Panama. Performers were Monique Mojica and her mother, Gloria Miguel.

Monique Mojica co-founded the Food for Chiapas Campaign in 1994, and remains an active supporter of the Zapatista struggle through a guerilla theatre troupe, Zapateatro!. She has written on Native issues across the Americas, and was guest editor of Canadian Theatre Review's special Native Theatre issue (Fall 1991).