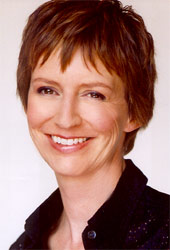 Versatile actor and playwright, based in Toronto, Ontario. She attended the St. John’s-Ravenscourt School in Winnipeg, and is a graduate of Queens University (history, 1980) and the National Theatre School of Canada. She continued her training as an actor under the director Robin Phillips in the Stratford Festivals Young Company in the late 1980s, where she performed the role of Juliet, amongst others. In 1994, her portrayal of Portia In The Merchant of Venice was lauded by the theatre reviewer of The Buffalo News: "Coyne is tall and sharp-featured, not at all the sort of teen-age ingenue usually in the part. Coyne brings maturity, experience, wisdom and terrific humor to Portia. And when Portia has to transform herself into a sharpish court lawyer to save Antonio from Shylock's filleting, it's not a stretch." (Terry Doran. buffalonews.com 4 June 1996).

She was co-founder, with her former husband Albert Schultz, of the Soulpepper Theatre Company. They have two children.

For Soulpepper Theatre Company, she has acted in Betrayal, A Winters Tale, A Chorus of Disapproval, Platinov, Don Carlos.

In 2005, for the Tarragon Theatre, she played the role of the protagonist in Helens Necklace by Carole Fréchette.

For Nightwood Theatre, she acted in Between the Sheets (2012, dir. Kelly Thornston) which examines the challenge of modern women, who may have high-powered jobs, husband and kids, but have trouble balancing all those competing interests.

Her first play, Kingfisher Days (Tarragon 2003) is based on her memoir about herself as a five-year-old girl, whose imaginative encounter with a fairy at her family cottage in Kenora is mediated by a retired English teacher. In this memory play, Coyne played the role of the child, and the grown-up narrator. The production also starred Martha Burns and Joseph Zeigler, and was directed by Albert Schultz, all company members of Soulpepper.

Her second play, Alices Affair (Tarragon, 2005, dir. Eda Holmes) considers the destructive influence of a writing teacher on his female student. She was a member of the Tarragon Playwrights Unit in 2002 and 2003.

For television, she conceived, co-wrote, and acted in the series Slings and Arrows, starring Paul Gross, which satirizes the tumultuous life with a theatre company that bears an amazing resemblance to the Stratford Festival. She has won two Gemini Awards for writing, and one for acting in the series.

Her short film, How Are You? about personal grief following a separation, co-written with Martha Burns, aired in 2010.

In 2017 she was appointed a Member of the Order of Canada by the Governor General for her contributions to Canadian theatre, film and television as an actor and writer.