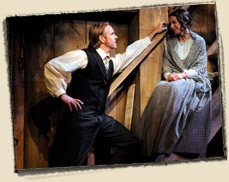 Ryan Hollyman and Michelle Monteith in The Mill Part 2: The Huron Bride. Photo by Chris Gallow

The Company's mandate reflected a focus on collective creation with an international purview: Theatrefront was dedicated to stretching the boundaries of the human experience through theatre. It collaborated with artists from other countries to cross geographic and cultural borders in the creation of unique multimedia work (website).

The first collective project, Return (The Sarajevo Project) (Tarragon Theatre 2006) was developed with a group of actors from Sarajevo, and a workshop production presented at the Sarajevo International Winter Festival in Bosnia-Hercgovinia in 2003. In Return, a Bosnian man living in Canada visits his family ten years after he had fled the war-torn country. His family resists his attempts to relocate them to Canada, and resents his apparent abnegation of his country. It received five Dora Mavor Moore Award nominations for Outstanding Production, Outstanding New Play, Outstanding Direction, Outstanding Female Performance, Outstanding Set Design. It is published by Playwrights Canada Press (2007).

Ubuntu (The Cape Town Project) (2009, co-produced with Tarragon Theatre and Neptune Theatre) was conceived by five members of Theatrefront and four South African actors from the Baxter Theatre Centre to develop a common theatrical language, to find the meeting point between the two cultures, to learn about ourselves while learning about people from the other side of the world (website). In South Africa, ubuntu refers to the spirit of community, the belief that humanity is tied together. In this collective creation, ghosts haunt a man and a woman, continents apart, as they are drawn together to discover the secrets of their past (website). Music and dance are used extensively: actions often assume dance-like forms, and characters frequently transform into objects; physicality frequently serves as an expressionistic replacement for dialogue in the play  which became hallmarks of Theatrefront. (Ratsoy 49). In 2012 the production toured Western Canada, appearing at the High Performance Rodeo in Calgary, Western Canada Theatre Company, and Firehall Arts Centre in Vancouver.

The Mill (2009, The Young Centre for the Performing Arts) was the biggest project ever undertaken by Theatrefront. It is a series of four full-length plays, written by four Canadian playwrights, starring the same ensemble of actors: Part 1: Now We are Brody by Matthew MacFadzean (dir. Daryl Cloran); Part 2: The Huron Bride by Hannah Moscovitch (dir. Christian Barry); Part 3: The Woods by Tara Beagan (dir. Sarah Garton Stanley); Part 4: Ash by Damien Atkins (dir. Vikki Anderson). The plays follow the lives of the inhabitants of Brody, a Canadian pioneer town, over four hundred years, revealing the horrifying story of the mill's past, and the secrets of the town's inhabitants. The Mill received four Dora Awards for Outstanding Production, Outstanding Set Design (Gillian Gallow), Outstanding Costume Design (Dana Osborne), and Outstanding Lighting Design (Andrea Lundy).

Mules by Beth Graham and Daniela Vlaskalic premiered at Crows Theatre in February 2019 (dir. Vikki Anderson). "Holed up in a washroom in Vancouvers International Airport, Cindy and Crystal are fighting for their lives. Crystal has a belly full of cocaine and a limited time to get it out of her system and Cindy is trying to keep her violent drug smuggling boyfriend at bay. When the janitor interrupts them, the crisis escalates and the consequences are tragic" (Theatrefront website).