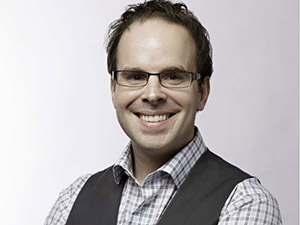 Multi-talented director, Daryl Cloran was born and raised in Sarnia Ontario, and graduated from the Drama Department at Queens University, where he has since taught. He studied new media and film directing at the Canadian Film Centre and the New York Film Academy. He was the founding Artistic Director of Theatrefront in 1998, a Toronto-based independent theatre company. In 2007 he became AD of Theatre & Company in Kitchener Ontario. In 2010, he moved to Kamloops to assume the position of Artistic Director at Western Canada Theatre Company. In May, 2016, he was appointed Artistic Director of the Citadel Theatre. He is married to actor, Holly Lewis, and has two sons.

For Bard on the Beach, he directed musical interpretations of Love's Labour's Lost (2016), and a very popular production of As You Like It (2018), wittily incorporating 25 Beatles songs in lieu of half the text, and set in Vancouver and the Okanagan in the 1960s.

He opened the 2017/18 Citadel season with an entertaining production of Shakespeare in Love on the Shoctor stage, skilfully directing a large cast through the convoluted scenarios of a complex play. He then remounted Ubuntu on the Maclab stage in a co-production with Prairie Theatre Exchange, a powerful, physical enactment of connections between continents and individuals. In 2019, he commissioned and co-directed two linked political farces by Kat Sandler: The Party and The Candidate, which played simultaneously on two stages in the Citadel complex, and necessitating very quick exits and entrances.

His first feature film was Late Fragment (produced by the National Film Board and Canadian Film Centre), which he co-wrote and directed.