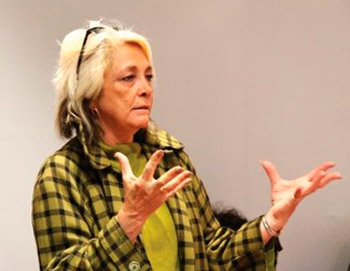 Dramaturge, director, and actor, Iris Turcott began her training at the City Literary Institute in London, England, then completed an Honours Degree in English and Drama at the University of Western Ontario, and a Bachelor of Education specializing in theatre at the University of Toronto. She assisted in the development of new plays across Canada. Among many others, she worked with Adam Pettle, Joan MacLeod, Michel Marc Bouchard, Brad Fraser, Tomson Highway, Ronnie Burkett, Robert Chafe, Daniel MacIvor and Anusree Roy.

She was involved in several international co-commissions with the Royal Exchange in Manchester, the Melbourne Festival, and the Abbey Theatre.

Iris Turcott was active in arts education and publishing. She taught at the National Theatre School of Canada, and served on the board of directors for the LMDA (Literary Managers and Dramaturgs of the Americas). She was also co-founder and co-artistic director of Playbill Theatre.

In 2008, she was awarded the George Luscombe Award for mentorship in theatre. In 2013, she was selected as Playwrights Guild of Canadas Honorary Award recipient for her devotion to Canadian theatre, and her work with Canadian plays and playwrights.

Iris Turcott died September 22, 2016 of cancer. In his recognition of her contributions to Canadian theatre, Robert Chafe wrote: "Iris was the purest artist Id ever met. Money truly didnt matter to her. Recognition didnt matter to her. Story did. Being true to an audience did. Honouring them. She loathed sentimentality, but she loathed pretension more. She demanded emotional honesty. She demanded engagement."