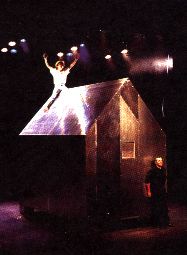 Quebec playwright and screenwriter, born in 1957 in the Lac-Saint-Jean village of Saint Coeur-de-Marie. He studied tourism at CEGEP and theatre at the University of Ottawa, graduating in 1980. He then worked as an actor with several Franco-Ontario companies; his first play, Les Porteurs d'eau was produced by Sudbury's Théâtre du Nouvel-Ontario in 1981. He soon gained wide recognition and a large international following for his subsequent works.

He is the author of more than 25 plays which have earned him many prizes in Quebec, across Canada and world-wide. His plays have been translated into several languages including Japanese, German, Italian, Spanish and English. They are particularly popular in Mexico where they are performed by La Capilla.

His early work La Contre-nature de Chrysippe Tanguay, écologiste (dir.Yves Desgagnés) was produced at Théâtre d'Aujourdhui and the National Arts Centre in 1983, but his first major achievement was a work about gay love and the nature of theatre, Les Feluettes (Théâtre Petit à Petit 1987, dir. André Brassard). In its English translation by Linda Gaboriau, Lilies has played across the country and made into an English-language feature film.

Bouchard's play L'Histoire de l'oie/Tale of Teeka (Théâtre des Deux Mondes 1992) is performed throughout the world in several languages. In 1995 his Voyage de couronnement was presented at the Théâtre du Nouveau Monde and has since been translated as The Coronation Voyage, again by Gaboriau, and presented as part of the 2000 playRites Festival and at the Shaw Festival. In February 2000, he premiered Sous le regard des mouches (which he also directed, at Compagnie Jean-Duceppe).

Le Peintre des madones ou la Naisance d'un tableau premiered in Italian in Florence, Italy in 2002, and in French in Canada at Espace Go. In English, translated by Gaboriau as The Madonna Painter, it premiered at Factory Theatre in 2009 (dir. Eda Holmes). Like many of Bouchard's plays, it deals with themes of social repression and religious mysticism, individual isolation, and the possibility of redemption. Set just after WWI in Lac Saint-Jean, it focuses on the efforts of a young priest to inspire the faith he believes will protect the town from the onset of the Spanish flu. He commissions a visiting Italian painter to create a fresco depicting the Virgin Mary, and searches for the perfect model from among four village women named Mary, each of whom has experienced a form of vision.

Tom à la ferme opened at Théâtre dAujourdhui in January 2011 (directed by Claude Poissant). It tells the story of a young advertising executive who goes to the country to attend the funeral of his lover who has died in a car accident. There he discovers the necessary life of sexual and social duplicity his lover has constructed in order to survive in his community and family. It was made into a film with gothic sensibilities by Quebec director Xavier Dolan in 2013. The English translation by Gaboriau is published by Talonbooks. The play premiered in English at Buddies in Bad Times in April 2015 (dir. Eda Holmes).

Christine, la reine-garçon, about the learned and witty 17th century Swedish queen, who was a lavish supporter of the arts before her abdication, and a sexual free spirit, was a finalist in the Prix 2012-2013 de l'Association québécoise des critiques de théâtre. Its English premiere, in a translation by Gaboriau opened at the Stratford Festival in August 2014 (dir. Vanessa Porteous).

The Divine: A Play for Sarah Bernhardt opened at the Royal George Theatre at the Shaw Festival in July 2015 (dir. Maxwell, with Fiona Reid as Bernhardt). When Sarah Bernhardt arrives in Quebec City at the beginning of the 20th century, she is proscribed by the Catholic Church. Two young seminarians  Michaud, an engaging theatre enthusiast and Talbot, a moody new recruit from a poor family  must bring her the bad news from the Archbishop. But they are converted to her theatrical world, and their lives are forever changed.

Bouchards latest show, Embrasse, about a son who tries to redeem his mothers character through fashion, premiered at the Théâtre du Nouveau Monde in September 2021, directed by Eda Holmes, who also directs the English premiere (under the title Kisses Deep) at the Centaur Theatre in January 2022.

Though the subjects of his plays are often serious, Michel Marc Bouchard is no stranger to comedy. Several of his plays, such as Les entreprises amoureuses, Le Désir and Pierre et Marie, have been mounted at summer theatres in French and English.

Bouchard has received many awards for his work, among them the Governor Generals Award. In 1999, his Muses Orphelines/Orphan Muses won the Chalmers Award.