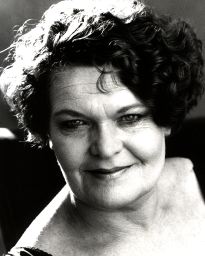 Accomplished, versatile actor and director for stage and television, born in 1945 in Farnborough, England, died November 14, 2016 in Vancouver. Her family moved to Calgary in 1946, then to Saskatoon Saskatchewan. With her siblings Susan Wright, Anne Wright, and John Wright, she has indelibly marked Canadian theatre, especially that of Western Canada.

Janet Wright acted lead roles in many of the country's top venues, including the Arts Club Theatre (Memoir, The Club, Miss Margarida's Way, Hedda Gabler); Neptune Theatre (The Seahorse); Theatre Calgary (Moon for the Misbegotten); Vancouver Playhouse (Who's Afraid of Virginia Woolf, A Lie of the Mind); Manitoba Theatre Centre (Not Wanted on the Voyage); and at the Stratford Festival (Uncle Vanya, Shirley Valentine, King John, Eddy, Hamlet, The Bacchae, and the celebrated production of Les Belles-soeurs with her sisters Susan and Anne.

She also directed several important productions including the touring production of Ken Mitchells Cruel Tears; the Arts Club Theatre productions of Glengarry Glen Ross, Mabel Leaves Forever, and Fool For Love; the Grand Theatre, London, productions of Dancing at Lughnasa and Wrong for Each Other; as well as several productions for Persephone Theatre which she co-founded. In 1998, she directed the Stratford production of Muriel Spark's The Prime of Miss Jean Brodie and in 1999 Stone Angel at Canadian Stage. She also appeared in the latter company's Les Belles-soeurs.

She appeared often in film and television, including a lead role in the popular CTV series, Corner Gas (2004-2009).

Her son, with former husband Brian Richmond, is playwright and actor Jacob Richmond.