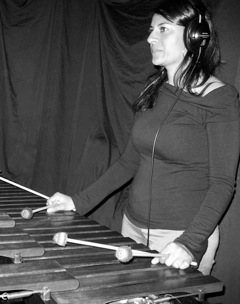 Composer, sound designer, and performer for theatre, based in Vancouver, British Columbia, specializing in original scores and live music. She was born in 1977 in Richmond, B.C., grew up in Kenya (where her family is from), and moved back to Canada when she was ten.

Joelysa Pankanea has a diploma from Vancouver Community College, and studied for two years at Simon Fraser Univerity, majoring in composition, with a focus on world music, jazz and classical. For the past two decades, she has been composing, directing and performing her original scores for the theatre, and more recently for film and animation. As a percussionist, she has performed live in all of Vancouvers largest houses, various alternative venues across Canada, and several international festivals.

More recently, she was composer/musical director for Electric Company Theatres world premiere of Carmen Aguirres Anywhere But Here; and the Arts Clubs production of Carried Away on the Crest of a Wave by David Yee.

She has won four Jessie Richardson Awards for outstanding composition.

Colin Thomas has written in The Georgia Straight that Pankaneas music is deceptively, stealthily simple; its repetitions become haunting; its big deep chords sink into you.