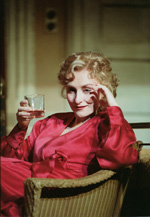 Accomplished and celebrated actor, born in Toronto in 1956. Seana McKenna has played in major theatres across Canada, and for twenty-eight seasons with the company at the Stratford Festival. She is a graduate of the National Theatre School of Canada.

Her many lead roles at Stratford include: Shakespeare's Lady Macbeth, Portia, Viola, Cordelia, Juliet, and the first female Richard III and Julius Caesar (2018). For the 2020 season, she played Queen Margaret in Richard III and Countess of Rossillion in All's Well That Ends Well. She has also played Tennessee Williams' Hannah in The Night of the Iguana; Eugene O'Neill's Mary Tyrone in Long Day's Journey Into Night (2018); Dolly in The Matchmaker by Thornton Wilder (2012). In 2013, she played Queen Elizabeth in Mary Stuart by Friedrich Schiller, and Madame Arcati in Blithe Spirit by Noel Coward at Stratford.

Other major roles in theatres across Canada include: the title role in Shakespeare's Antony and Cleopatra (Centaur Theatre); Maggie in Cat on a Hot Tin Roof (Grand Theatre, London); Blanche in Streetcar Named Desire (Theatre New Brunswick); Eliza in Pygmalion and Candida (Shaw Festival); Medea and Hedda Gabler (Manitoba Theatre Centre). In 2000, she played Blanche again at MTC and Medea again at Stratford, and appeared in Wit at Canadian Stage in March, 2001. In 2011, she performed the role of Anne in Shakespeare's Will by Vern Thiessen (Globe Theatre). In January 2018, for Groundling Theatre Company at the Harbourfront Centre in Toronto, she played Lear as a "power-suited executive figure with a passing resemblance to Hillary Clinton or Theresa May" (Martin Morrow. "Striving to better what's well," Globe and Mail 20.1.2018: R5). She played Penelope in the Grand Theatre, London production of The Peneliopiad (dir. Megan Follows) in 2019. For Tarragon Theatre in October 2019, she played a contemporary interpretation of the Russian witch Baba Yaga as a sexy osteologist in Yaga by Kat Sandler.

She has been awarded three Dora Mavor Moore Awards for her performances in Saint Joan (Theatre Plus), Orpheus Descending (Mirvish/RMTC), and for directing Valley Song (New Globe); a Jessie Richardson Award for Wit (Vancouver Playhouse); and a Genie for Hanging Garden. She has an Honorary MFA in Acting, and Doctor of Sacred Letters from Trinity College, University of Toronto; an Elizabeth II Diamond Jubilee Medal; and is a member of the Order of Canada (2018).

Seana McKenna is married to actor/director Miles Potter. They have a son, Callan Potter (age 20 as of 2019), who also attended the National Theatre School, and acts in TV productions.