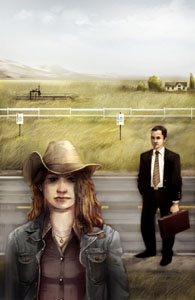 Theatre company, based in Calgary Alberta, founded in 2004 by Simon Mallett to produce provocative new Canadian plays which explore socially and politically charged themes. The Downstage Creation Ensemble is dedicated to new play development, working collectively to research and produce innovative theatre. Each season includes three plays, one of which is created by the Ensemble in alternate years. Downstage also hosts an annual theatre festival of new works called Uprising. For thirteen years, the Artistic Director has been Simon Mallett. From April 2017 to October 2018, Ellen Close was Artistic Director. As of November 1, 2018, the A.D. is Clare Preuss, a graduate of the University of Alberta BFA program in acting, who has worked with theatres across Canada.

Downstage's venues are a black box theatre seating fifty in Arts Commons (formerly the Epcor Centre for the Performing Arts), called Motel; and the Engineered Air Theatre in the same complex. Productions are also staged in larger theatre spaces, like Vertigo Theatre, and in found spaces and specific performance sites.

Productions include: Pulling the Wool by Simon Mallett (2005), A Line in the Sand by Guillermo Verdecchia and Marcus Youssef (2005), Prometheus Bound adapted by George Ryga (2006), Heaven by George F. Walker (2006), and This is For You, Anna.

In 2007, Downstage undertook an ambitious premiere production of Man Out of Joint by Sharon Pollock which explores issues of responsibility in respect to the incarceration of Omar Khadr at Guantanamo Bay.

Subsequent productions include: Arms Length Embrace by Downstage Creation Ensemble (2007), The Dishwashers by Morris Panych (2007), Habitat by Judith Thompson (2008), Palace of the End by Thompson (2008), The Piper by Colleen Murphy, Enoch Arden in the Hope Shelter by Thompson (2009), Bone Cage by Catherine Banks (2010). In the Wake by Downstage (2010, Betty Mitchell Award), which explores eco-terrorism, was produced at One Yellow Rabbits High Performance Rodeo, and toured across the country, before returning to Calgary for the Magnetic North Theatre Festival in June, 2012.

The 2011-12 season featured: Drew Hayden Taylors In a World Created by a Drunken God, and Sia by Alberta playwright Mathew MacKenzie. Set in a Ghanaian refugee camp, it exposes the desperate consequences of war in Liberia when a former child soldier kidnaps a young white aid worker in order to ransom his sister, Sia.

For the 2012 Alberta Theatre Projects' playRites Festival, the Downstage Creation Ensemble researched and developed a docudrama on the conflict between energy companies and ranchers entitled Good Fences, based on interviews, and with the actors playing themselves as well as oilmen and ranchers. It then went on a community tour in 2015, updating topical and personal references. Not surprisingly, the audience and critical response was mixed.

The 2013-14 season featured the English-language premiere of A Bomb in the Heart by Wajdi Mouawad (trans Linda Gaboriau). In 2016, Downstage produced the world premiere of Matthew MacKenzie's Benefit.

Recently, Downstage has shifted its mandate from the production of politically controversial works to creating opportunities for social bridging, to enable dialogue and discussion for an audience that reflects the demographic diversity of Calgary. To this end, it has livestreamed a performance of rihannaboi95 by Jordan Tannahill. It has also initiated a "Pay-It-Forward Program," offering a quarter of its seats as rush tickets free-of-charge.

In March 2017, Downstage premiered a satiric Canadian musical, co-developed and produced with Forte Musical Theatre and Hit & Myth Productions in Calgary, entitled, Crime Does Not Pay, about the violent social consequences of the comic book industry in the 1940s. It was written by Calgarians Kris Demeanor and David Rhymer and directed by Simon Mallett.

In 2020, when the Covid-19 pandemic closed theatres across Canada, Downstage and Article 11 co-produced a film version of Tara Beagan's Deer Woman, live-streamed by the National Arts Centre. A Blackfoot woman in a forest clearing films herself explaining why she is about to gut a white man who has murdered her sister, and other Indigenous women. This searing monologue, compellingly performed by Cherish Violet Blood, is a response to Colleen Murphy's play, Pig Girl, in which an Indigenous woman is the victim.