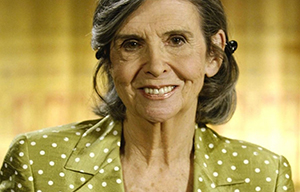 Actor born in Montreal, Quebec March 17, 1928; died August 8, 2013 at the age of 85. With a career spanning 70 years, Hélène Loiselle was one of the most sought after and respected performers in Canada.

She studied with various teachers when she became part of the Compagnons de Saint-Laurent where she stayed for eight seasons performing works by Racine, de Musset, Rostand and Shakespeare (Juliet). She continued her studies in Paris, returning to Quebec to perform with emerging companies like Théâtre de l'Égrégore, the Nouvelle Compagnie Théâtrale / Théâtre Denise-Pelletier, Compagnie Jean-Duceppe,Théâtre du Nouveau Monde/TNM, as well as at the Café de la Place des Arts and the Théâtre de Quat'Sous. She performed in a broad range of works from Sophocles to Neil Simon, via Chekhov, Ibsen and Pirandello. In February 2000, she appeared in the Théâtre du Rideau Vert production of Ionesco's Les chaises/The Chairs, and in the Quat'Sous production of Six personnages en quête d'auteur/Six Characters In Search of An Author (October, 2001).

Hélène Loiselle appeared in many important premieres including Gratien Gélinas' Bousille et les justes, Françoise Loranger's Médium saignant, and several by Michel Tremblay, including Les Belles-soeurs as the snob, Lisette de Courval (Rideau Vert 1968), A toi, pour toujours, ta Marie-Lou, and En pièces détachées. She also performed in the TV production of the latter work, and the revival of the play at the Théâtre du Nouveau Monde in 1994.

She taught at the CEGEP Lionel-Groulx and the National Theatre School of Canada.

Helene Loiselle's performances were marked by a visceral intensity of emotion balanced with with a touching vulnerability. She was awarded Le Prix Denis-Pelletier in 2006.

She was married to actor Lionel Villeneuve to his death in 2000.