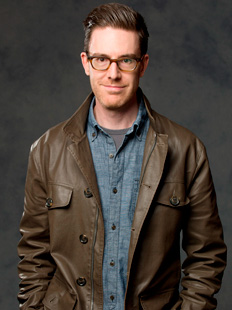 Toronto-based set and costume designer whose work has been seen across Canada in productions of theatre, opera and dance.

For eleven seasons at the Stratford Festival, Michael Gianfrancesco has designed productions at the Festival, Studio and Avon theatres, including the sets and costumes for Much Ado About Nothing, Edward II, The Triumph of Love, The Blonde, The Brunette and the Vengeful Redhead; and the sets for The Comedy of Errors, An Ideal Husband, Taking Shakespeare by John Murrell, and Christina, the Girl King by Michel Marc Bouchard (2014).

For the Shaw Festival, he has designed the costumes for In Good King Charless Golden Days, One Touch of Venus, The Light in the Plaza (2013).

Other work includes: sets for A View From the Bridge (Segal Centre for Performing Arts), and for White Christmas; costumes for Fiddler on the Roof, Looking Back West, Its A Wonderful Life (Manitoba Theatre Centre); The Drowsy Chaperone (MTC/Theatre Calgary), Rock n Roll (Canadian Stage/Citadel). He designed sets for Seussical, and The Wizard of Oz for Young Peoples Theatre; Little Shop of Horrors (Canadian Stage); The Rocky Horror Show (MTC/Canadian Stage). He designed costumes for The Spitfire Grill (Grand Theatre, London); Annie Get Your Gun (Massey Hall); Beauty Dissolves in a Brief Hour (Queen of Puddings Music Theatre). In 2006 he designed the world premiere of The Midnight Court for Queen of Puddings Music Theatre, which toured to the Linbury Theatre at the Royal Opera House, Covent Garden. In 2011, he designed imaginative stylized set and costumes for the Queen of Puddings premiere of Svadba  Wedding in Toronto, which celebrated an exuberant sexuality while hinting at irrevocable change and loss.

In 2008, he received the Virginia and Myrtle Cooper Award in Costume Design from the Ontario Arts Foundation. He is the recipient of a Tyrone Guthrie Award and the Brian Jackson Award from the Stratford Shakespeare Festival.