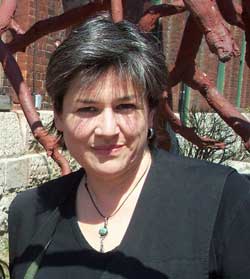 Playwright, director, dramaturg, actor, and educator, Yvette Nolan has contributed substantively to the creation and performance of First Nations Theatre in Canada. She was born in Prince Albert, Saskatchewan to an Algonquin mother and an Irish immigrant father in 1961. Raised in Winnipeg, she graduated from the University of Manitoba with a B.A. in 1997. She has worked with Agassiz Theatre, Popular Theatre Alliance of Manitoba, Theatre Projects Manitoba, Manitoba Association of Playwrights, the Manitoba Theatre Centre, Nakai Theatre in Whitehorse, and the Society of Yukon Artists of Native Ancestry.

She has directed plays by Miche Genest, Drew Hayden Taylor, Philip Adams, George Ryga (The Ecstasy of Rita Joe at Western Canada Theatre Company April 2009, in a co-production with the National Arts Centre), and by Marie Clements.

She was President of PUC (now Playwrights Guild of Canada) from 1998 to 2001. From 2003 to 2010, she was Managing Artistic Director of Native Earth Performing Arts in Toronto.

She is editor of the second edition of plays by First Nations playwrights and Writers of Colour, Beyond the Pale II; and of Refractions: Solo with Donna-Michelle St. Bernard. In her critical text, Medicine Shows: Indigenous Performance Culture (Playwrights Canada P, 2015), she envisions the indigenous theatre worker as "a conduit between the past and the future" (3) who creates "ceremony" to stimulate memory and unite communities. She believes that Theatre is all about relationships, and how we move from conflict to conciliation, so of course it is the perfect place to explore the relationships between Indigenous people and Canadians (http://artsandscience.usask.ca.

She has written more than a dozen works for the theatre: Blade (1990) shows how a young white university student murdered by a serial killer is reconfigured as a prostitute by the media. In A Marginal Man, a man who decides to protest violence against women becomes a target of violence himself. Child shows how two women, one Indigenous and one white, are affected by incest.

In Job's Wife the protagonist, Grace, a middle class Catholic white woman pregnant with the child of a Native man, prays to God, who materializes as "Josh," a large Indigenous man, dressed in rags. Job's Wife was first produced by Theatre Projects Manitoba and directed by the playwright. It has been published in the anthology, Staging Coyote's Dream (2003), edited by Monique Mojica and Ric Knowles.

In Video, a young wife relives her wedding by watching the video recording. Faithless is a one-act comedy of manners about temptation and adversity.

Annie Mae's Movement (produced by Native Earth Performing Arts in 2001) tells the story of the murder in the United States of Annie Mae Pictou Aquash, a Mi'qmak woman from Nova Scotia, involved in AIM (also the subject of a radio and stage play by Sharon Pollock, entitled The Making of Warriors). Annie Mae's Movement has also been produced by Hardly Act Theatre in the Yukon, in Halifax at Eastern Front Theatre's "On the Waterfront Festival", and by Red Roots Theatre in Winnipeg.

Other plays include Ham and the Ram, a recasting of the Abraham/Issac story in which the ram questions, but then accepts a sacrificial substitution; and Two Old Women, a post-apocalypse tale which draws on Athabaskan legend to show the importance of traditional knowledge.

The Unplugging opened at Factory Theatre in a Native Earth Performing Arts Production in March 2015 (dir. Nina Lee Aquino). In a remote community west of Winnipeg, older women are cast out of their community because they are deemed useless. But two very different women have enough survival skills in an environment off the internet: Bern knows about an abandoned cabin from her early party days; Elena has learned to live off the land from her grandmother. When a young man intrudes, they must decide whether to trust him. The Unplugging won the 2013 Jessie Award for outstanding new script.

During the Covid-19 pandemic in 2020, Nolan wrote a fifteen-minute monologue entitled Katharsis for Prairie Theatre Exchange. The performance in the empty theatre by Tracey Nepinak was filmed and streamed on-line. It considers the social and personal importance of theatre at a traumatic time when people are scared and unsure, and suffering from an acute sense of isolation: "We come together in these places to work things out."

In 2007 Nolan received the Maggie Bassett Award for service to the theatre community; in 2008 she was awarded the City of Toronto's Aboriginal Affairs Award; and in 2011, she received the George Luscombe Award for mentorship in professional theatre. In 2021, she was awarded a Gina Wilkinson Prize for artists who place community and new creation models at the heart of their artistic leadership.

She is currently based in Saskatoon, where she teaches playwriting to undergraduates at the University of Saskatchewan and pursues a Master of Public Policy degree. .