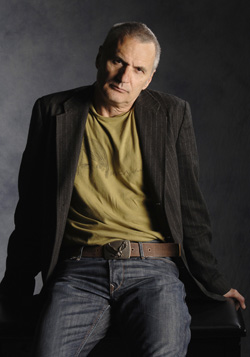 Playwright, actor, and director Morris Panych is a man for all seasons in Canadian theatre. He has directed over ninety productions across Canada, and written thirty plays that have been produced throughout Canada, Britain, the United States, Europe, Asia, Australia, and New Zealand in a dozen languages.

Panych was born in 1952 in Calgary and grew up in Edmonton, Alberta. He received a diploma in radio and television arts from the Northern Alberta Institute of Technology, and then studied creative writing at the University of British Columbia (BFA, 1977), and theatre at East 15 acting school in London, England. He works primarily in Vancouver, and more recently, Montreal.

His first play, Last Call - A Postnuclear Cabaret premiered at the Tamahnous Theatre, Vancouver in 1982, and has been produced independently across the country, including by the Globe Theatre, Regina (March 2003), directed by Ruth Smillie. It was also adapted as a television show by the CBC as Last Call - The Television Show. This apocalyptic musical co-starred Panych and his partner, Ken MacDonald, and MacDonald also wrote and played the music. MacDonald's set designs have been an important element in most of Panych's plays.

As artistic director of Tahmanous, Panych co-wrote two more musicals with MacDonald: Contagious (1984), and Cheap Sentiment (1985); and both Panych and MacDonald performed in Simple Folk, Songs of a Generation (1987), which toured to the Soviet Union.

In 1989 the Arts Club Theatre in Vancouver produced his absurdist, thought-provoking comedy about a man attempting suicide, 7 Stories.

The Necessary Steps followed in the same venue in 1991, and The Ends of the Earth in 1994. The Ends of the Earth is an ambitious investigation of the meaning of life in terms of a journey by two men with very different outlooks. One is paranoid, convinced that the other is spying on him, and flees to "the ends of the earth" in an effort to escape him. There they encounter two mysterious women in a rooming house that teeters on the edge of a cliff, who assume various roles to test their ability to survive.

In 1995 Vigil premiered at the Belfry Theatre in Victoria, and won Vancouver's Jessie Richardson Award for best play. Vigil has been performed in over thirty theatres in Canada and the United States, including the Tarragon in 1996, the Phoenix in Edmonton in 1996, in San Diego in 1997, and in Washington to sold-out houses. In 2002, under the title Auntie and Me it played at the Edinburgh Festival, and in January 2003 opened at Wyndham's Theatre in London's West End with Alan Davies as Kemp and Margaret Tyzack as Aunt Grace. In 2012, it premiered in French as Vigile (ou Le veilleur Théâtre du Rideau Vert. In Vigil a solitary young bank employee impatiently awaits the death of a silent, bedridden old woman, whom he believes is his aunt, filling the time with ruminations and recollections, and one-liners on mortality. In a programme note for the West End production, Panych dedicates the play "to all who have died and all who've not yet got around to it." According to Times critic Benedict Nightingale, the impression of a "laugh-riot for masochistic no-hopers en route to the Netherlands with their suicide-packs" is mitigated by the suggestion "that months of sitting beside a supposed death-bed creates a bond, even between a silent aunt and the young man who has desperately built a Heath Robinson euthanasia machine to hasten her demise" (www.timesonline.co.uk/article).

Panych wrote and directed one of his strongest plays, Lawrence & Holloman for the Tarragon Theatre in 1998.

In 1998 he co-created and directed The Overcoat, a physical theatre piece in which choreographed movement and music function in place of dialogue. This production toured across Canada. Panych also directed the television version of The Overcoat.

His monologue, Earshot premiered at the Tarragon Theatrein 2001, and was remounted in a joint production by Vancouver Playhouse and Alberta Theatre Projects in 2002. A man without any perceivable vocation or occupation, isolated in his room, protests against the noise from neighbouring rooms which infiltrates his space, and threatens to drive him mad. Only when he begins to sympathize with the grief of a widow next door, does he begin to experience a reprieve from the torture of the outside world.

Girl in a Goldfish Bowl (Arts Club Theatre, 2002) is set in a Steveston Cannery on the West Coast, the home of a dysfunctional family which the mother continually threatens to leave. The point of view is that of the ingenuous, ebullient young daughter who imagines that her dead goldfish has metamorphosed into a young man from the sea who will save them all. He doesn't. The play won a Jessie Richardson Award (2002), a Dora Mavor Moore Award (2003), and a Governor Generals Award (2004).

The Dishwashers also premiered at the Arts Club Theatre in 2005. In the steamy bowels of an upscale restaurant, two dishwashers from different social castes and with different philosophies, debate the meaning of their work.

What Lies Before Us (Canadian Stage, 2007, dir. Jim Millan) is set in the Canadian Rockies in 1884. Two less-than-competent railway surveyors and their Chinese servant, Wing, are stranded in Canada's Rockies when their guide abandons them. They argue over strategies for survival, but even their final attempts at getting help are futile, and further compromise their chances. After their demise, the final monologue, addressed to the audience by the hitherto silent Wing in Chinese, proves to be absurdly ironic. The title references a line from American philosopher, Ralph Waldo Emerson: "What lies behind us and what lies before us are tiny matters compared to what lies within us.

The Trespassers opened at the Stratford Festival in 2009 (dir. Panych). The Trespassers is a coming-of-age story, focusing on the relationship of a young teenage boy with his anarchist, atheist grandfather and his born-again Christian mother, the one determined to "educate" him in life, and the other to protect him. Both the small town in which it is set, and the grandfather are dying, and the play's preoccupation with death reflects Panych's recent loss of his own parents. The play is also informed by ethical debates over the Ten Commandments, and the meaning of "trespassing." It has subsequently been staged at the Belfry Theatre (Fall 2010), and Vancouver Playhouse (Spring 2011).

Montreal's SideMart Theatrical Grocery premiered Panych's Gordon in October 2010 (dir. Andrew Shaver). Gordon is set in the urban wasteland of Hamilton, Ontario, featuring two men and a girl on a crime spree who hide out in a rundown house, and their response to the owner, a derelict left over from the bust of the steeltown boom, who also happens to be one of the crook's father, with the same name --"Gordon." It explores the ironic dimensions of family legacies and responsibilities.

In Absentia, about a woman's attempt to deal with the lengthy absence of her husband, captured by insurgents in Columbia, through a relationship with a young tansient who comes to her door, premiered at the Centaur Theatre in 2012, directed by Roy Surette. For the 2012 Stratford Festival season, Panych wrote the book for a musical based on the poems of Robert Service entitled Wanderlust, with music by Marek Norman, and set by Ken MacDonald.

Sextet (dir. Panych), which considers the frustrations of six sexually mismatched classical musicians trapped in a motel during a blizzard, opened at the Tarragon in November 2014. The multiple doors of Ken MacDonald's set suggest a farcical scenario, but the manic confusion of the action is underscored by tones of loneliness and emotional pain, as the characters question their roles in life. The philosophical underpinning is fully evident in the final line: The universe plays us. All we can do is play back. Professor Cynthia Zimmerman observed that "Their personal lives are a total mess, but their disciplined art is beautiful" (email, 27 Nov 2014).

The Shoplifters had its world première in Washington, D.C. and its Canadian premiere at Theatre Calgary (directed by Haysam Kadri, designed by Ken MacDonald). When two women (one a veteran, the other a novice are apprehended for shoplifting by two security guards in a grocery store, the reasons for and nature of theft come under hilarious philosophical scrutiny. The older guard is more sanguine about theft, and wants to give the women a chance to explain; the younger--a keen new recruit from the Salvation Army--wants the women apprehended and charged. In an interview for the program, Panych explains his moral ambivalence about stealing: "Theft at its worst is greed, but at its best can symbolize an act of defiance against the system... We all have our own internal sense of justice that doesn't always match the legal one."

The Waiting Room (music and lyrics by John Mann) premiered at the Arts Club Theatre in October 2015. It follows the journey of a man with cancer through the waiting rooms of several hospitals.

This London Life, a comedy which compares two Londons -- one in England, the other in Ontario -- premiered at the Grand Theatre, London in October 2019 (dir. Panych).

Panych was slated to return to the Stratford Festival for the 2020 season with Frankenstein Revived, a synthesis of theatre and dance that explores the question at the heart of Mary Shelley's novel, "What does it mean to be human?" (written and directed by Panych). The world premiere at the new Patterson Theatre was postponed when the Covid-19 pandemic closed theatres in Canada and around the world.

His plays for young people - Cost of Living (1990), 2B WUT UR (1992), and Life Science (1993) were produced by Green Thumb Theatre, and have toured extensively. They are published under the title, Other Schools of Thought.

Panych has acted in over fifty plays, and in television series such as X-Files. Recent directing credits include Nothing Sacred (2004) and The Doctor's Dilemma (2010) at the Shaw Festival; and The Amorous Adventures of Anatol at the Tarragon (2013).

He has won the Jessie Richardson Award fourteen times for acting and directing. He has won Toronto's Dora Mavor Moore Award five times, three Sidney Riske Writing Awards, and a Chalmers Award. In 1995 he was awarded the Governor Generals Award for Drama for The Ends of the Earth, and in 2004 for The Girl in the Goldfish Bowl.

Panych claims to have no theories about theatre, only a certain need for liberation: "I sense that to illustrate through theatre a multiplicity of truths, is to allow the audience to begin to reclaim truths of its own. To look at a play and say, 'this a pretence invented out of nothing. These characters are trapped inside problems that dont even exist,' and yet to remain committed to that reality for a time just for the hell of it, to begin to understand what the power of theatre is. Not to mention life. The power to question. . . . Whats important to me now, as always, is to keep things moving. And thats it. My entire theory of theatre. To keep changing. Rediscovering. Questioning not only the accepted ideas of theatre, but the reversal of those ideas as well. (Canadian Theatre Review 76 [1993]:58-59).

His plays are characterized by existential themes and "theatre of the absurd" style and sensibility. They typically set their interrogations of the meaning of life in culturally and nationally neutral locales, and they pose broad philosophical questions on human interaction and isolation, on the nature of good and evil, and on the relationship between fantasy and reality. Many are black comedies that oscillate between hope and despair.

Panych's plays are published by Talonbooks.