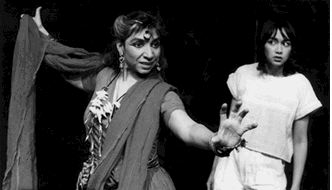 Though ethnic theatre truly exploded post-WWII with the massive influx of immigrants and refugees (including theatre professionals), theatre representing the country's broad cultural base had existed in Canada since before the turn of the century. By the 1920s and 30s, Manitoba and Ontario Ukrainian communities were presenting plays. By WWII, there were over 300,000 Ukrainians in Canada, and many local halls had their own drama groups.

After the war, theatre companies from diverse cultural communities were established across the country. The Italian Piccolo Teatro (1949-76), the Latvian D.V. Theatre (1951-) the Ukrainian Drama Theater Zahrava (1953-), the Hungarian Art Theatre (1958-) all in Toronto, the Yiddish Theatre (1956-), the Deutsches Theatre (1952-) both in Montreal, and the Lithuanian Aukuras (1950-) in Hamilton, all attest to the strength of the various communities and their devotion to the arts. Following 1968, after the demise of the "Prague Spring," Czech immigrants formed Nove divadlo (New Theatre) to perform cabaret versions of popular Czech stories in diverse Toronto venues. Since its inception, this group of volunteers has mounted over 150 plays. By the 1970s, the Company was performing plays by Vaclav Havel in Hart House Theatre. As well, in Montreal, Yiddish theatre, touring and local, played the Monument National.

Although the Eurocentrism of the groups was evident--many enacted a nostalgia and a pride in identity--they also provided a means of cultural education for both immigrants and audience. And many of the companies' talented young artists found a place in the anglophone or francophone theatrical communities.

The 1970s and 80s also saw the creation or growth of several Black companies including the roots of Black Theatre Workshop (Montreal), Theatre Fountainhead and Black Theatre Canada (Toronto). In the 80s, Nova Scotia's Kwacha was supported by both critics and audiences for a decade. Obsidian Theatre Company was founded in Toronto in 2000.

Though Asians had been represented in theatre in Canada as early as 1933 in the Chinese United Dramatic Society's presentations of Cantonese opera, it was late in the century before the various communities of the Pacific Rim began to form companies like the Korean Kookdan (Toronto, 1982), the Filipino Carlos Bulosan Theatre (Toronto, 1984), Canasian Artists Group (Toronto, 1983), and Teesri Duniya Theatre (Montreal, 1981). More recently, fu-GEN Asian-Canadian Theatre Company (Toronto, 2002) has developed and presented works by Filipino, Chinese, Korean, and Indian artists, and Modern Times Stage Company combines traditional Iranian stories with contemporary sensibilities.

In Kitchener, MT Space was founded in 2004 with a mandate "to explore cultural intersections amongst people, their histories, and their forms of expression."

In Vancouver, numerous independent theatres have adopted an intercultural mandate, and focus on the development and production of the works of minority artists; for example, urban ink and Rumble Theatre.

The range of productions in the early companies varied from European classics (Piccolo's production of Goldoni's La Locandiera), to the traditional theatrical forms of the specific group (Toronto's Iranian Namysh-Khaneh's classical works in Farsi), to fusionist theatre linking the community with the new country's theatre (Yiddish Theatre's production of Michel Tremblay's Les Belles-Soeurs), to expressions of a people in a new land (Canasian's production of Rick Shiomi's Yellow Fever). Many of these plays have been interrogations of family conflict, when the traditional values of immigrant parents are contested by their children, as they search for their own way of living in a different society and culture. Contemporary "intercultural" drama also explores the complex intersecting dynamics of an increasingly diverse Canadian society.

Since the 1980s companies like Cahoots Theatre Company, Nightwood Theatre, Factory Theatre, and Theatre Passe Muraille, have all encouraged the development of works outside the white mainstream through workshops, readings, and festivals. Multicultural voices are also being heard in mainstream theatres, such as Centaur Theatre's co-production with Black Theatre Workshop of Playboy of the West Indies, and the successful Soulpepper Theatre Company's production of Ins Chois Kims Convenience which has been performed across Canada and in New York (2017), and adapted as a popular CBC television series. Both mainstream and ethnic minority audiences have responded enthusiastically to Dennis Foon's New Canadian Kid, Marty Chan's Mom, Dad, I'm Living with a White Girl, and Leon Aureus's Banana Boys. There has also been a very positive critical reception for George Seremba's Come Good Rain; and of Michel Monty's treatment of white/Black relations in Montreal, Prise de Sang. The production of playwright/actor Djanet Sears's Harlem Duet at the Stratford Festival also signals a more inclusive mandate. These productions, and many others all point to a broadening of theatrical consciousness in Canada, and to an embracing of diversity in the arts.