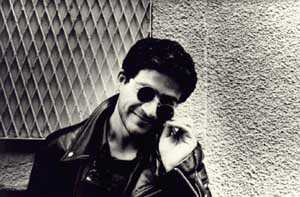 Actor/playwright/director, born in Lebanon in 1968. He emigrated to Montreal from Paris with his family at the age of nine, and graduated from the National Theatre School of Canada in 1991, where he has since directed.

He first came to notice as a director, forming the Théâtre O Parleur when he left NTS (with Isabelle Leblanc), and when he staged a walking production of Shakespeare's Macbeth in French in Old Montreal that began at two o'clock in the morning. He was also noticed for his exuberant participation in the premiere of Cabaret Neiges Noires, and for his performance in the well-received production of Camus' Caligula (Nouvelle Compagnie Théâtrale / Théâtre Denise-Pelletier), and in his own play, Alphonse. 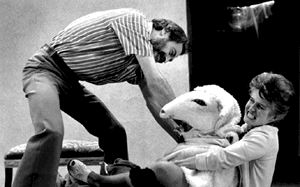 His early plays include Partie de cache-cache entre deux Tshécoslovaques au début du si è cle, Willy Protagoras enfermé dans les toilettes, Les Mains d'Edwidge au moment de la naissance, and Journée de noces chez les Cro-Magnons (performed at Théâtre d'Aujourd'hui in 1995, translated by Shelley Tepperman as Wedding Day at the Cromagnons, and staged at the National Arts Centre and Theatre Passe Muraille, 1996). This work reflects his upbringing in war-torn Lebanon and tells of a family which decides to go ahead with the marriage of their only daughter despite the bombs falling around them, despite the strains within the family, and despite the fact that the bridegroom doesn't exist.

In 1998, his career exploded: he was involved in productions in four major theatres in Quebec; and he was acclaimed by the Festival de théâtre francophone de Limoges (France) (as it had done previously with Robert Lepage and Michel Marc Bouchard). He also received the Quebec Critics' Circle Award for his production of his own play Willy Protagoras... . His play, Les mains d'Edwidge... opened at Théâtre d'Aujourd'hui.

In February, 1999, the production of his adaptation of Don Quixote (Théâtre du Nouveau Monde) won the Masques Award for best Montreal presentation. At the gala, it was announced that Littoral (1997, translated by Shelley Tepperman as Tideline) had been invited to the prestigious Festival d'Avignon in summer, 1999. It was very successful there, and toured Europe as well. In November, 2000, he received the Governor Generals Award for Littoral.

His work, Rêves, was presented as part of the 1999 Festival de Théâtre des Amériques (now Festival TransAmériques), and revived in 2000 at Théâtre de Quat'Sous. Willy was revived at Théâtre d'Aujourd'hui in September, 1999. His Alphonse premiered in English at Pink Ink Theatre (now Pi Theatre) in Vancouver, 1998, and was subsequently produced in 2000 at Northern Light Theatre in Edmonton.

In May, 2000, Mouawad directed the English-language production of Jason Sherman's Reading Hebron for Teesri Duniya Theatre in Montreal.

In May, 1999, he was named to the artistic directorship of the Théâtre de Quat'Sous, serving from January, 2000 until 2004. He promised seasons of "ethics, ideas, symbols, morality and philosophy" for the house. In 2001 he launched the season of Quat'Sous with his own adaptation of Pirandello's Six Characters in Search of an Author.

On the controversy he stirred when he "admitted" to believing in God he told Hour Magazine (Montreal, August 26, 1999), "I never thought that saying I was a believer would provoke such vitriol. I was merely explaining my optimism [vis a vis his childhood in war-torn Lebanon, for instance]. I was made to believe that to be an artist and to believe in God was shameful. In my spirit, a separation exists between art and faith. Art is the public character of something, faith is the subterranean and interior character of something. The act of creation is a human act. It is communication between humans. When I work, my attention is on the way people live among themselves. That's what interests me. Not the relationship between humans and God. Though the subject is important, the plays which I will find interesting will always put it in a human context, first."

Incendies, translated by Linda Gaboriau as Scorched, premiered in France in 2003, and subsequently in Quebec in the same year at Théâtre de Quat'Sous (dir. Mouawad) during the Festival de théâtre des Ameriques; and at the Tarragon Theatre in 2007, and the Citadel Theatre in 2009. It is the second play in a tetralogy which begins with Littoral, and continues to explore the question of origins. Following the death of her mother, the daughter, Nawal, returns to the Middle East to find a lost father and brother, and experiences the horror of war and the possibility of redemption for herself and her brother. In 2010 it was adapted as a film, directed by Denis Villeneuve, which was nominated for an Oscar as Best Foreign Language Film.

In September, 2008, his solo work, Seuls, in which he plays a professor researching the plays of Robert Lepage, sold out at the Théâtre d'Aujourd'hui in Montreal. It is the first of a cycle of five plays based on his family members, and followed by Soeurs (developed in collaboration with Annick Bergeron), Frères, Père, and Mère. Layers of recorded dialogue, music, and projections complicate the narratives.

His preoccupations with the large mythic patterns inherent in tragedy, and with strong women responding to traumatic circumstances were exercised in 2012 in his production of three plays about women by Sophocles: Women of Trachis (with Sylvie Drapeau as Deianeira), Antigone, and Electra, under the collective title Des Femmes at Théâtre du Nouveau Monde.

Pacamambo (Toronto Repertory Company, 2014, trans. Shelley Tepperman) is a lyrical, life-affirming play about death. It tells the story of Julie, teetering between denial and rage, who disappeared for three weeks and was discovered in her grandmothers apartment storage locker with her dog, Growl, and the decomposing body of her grandmother.

From 2008 to 2012, he was Artistic Director of French theatre at the National Arts Centre. He was appointed as an Officer of the Order of Canada in 2009.

Mouawad moved to Paris to take over the Théâtre national de la Colline, where he presented his latest work, Tous des Oiseaux, set during the Israeli-Palestinian conflict. In May 2019, this production travelled to Montreal for the Festival TransAmériques and the Carrefour international de théâtre in Quebec City. Antoni Cimolino directed the English-language premiere at the Stratford Festival from July 30 to October 13, 2019 (trans Linda Gaboriau as Birds of a Kind). The play explores the fraught political and social complications of a relationship between Wahida, an American of Arab background who is studying history, and Eitan, a German-born Jew studying genetics, who meet in a New York library. When Eitans devout father reacts furiously to their relationship, the lovers travel to Israel, and are caught up in a terrorist attack on the bridge between Jordan and the West Bank. While Eitan lies unconscious in a hospital bed, Wahida perseveres with her search for his grandmother, inadvertently uncovering a conflicted family history which crosses ethnic and religious borders.

In his writing and in his directing, Wajdi Mouawad explores the tension between individual freedom and the renunciation of the self, quoting Kafka on the subject: In the struggle between yourself and the world, back the world. They are stylistically complex, characterized by long phrases, repetitions, and many episodes.